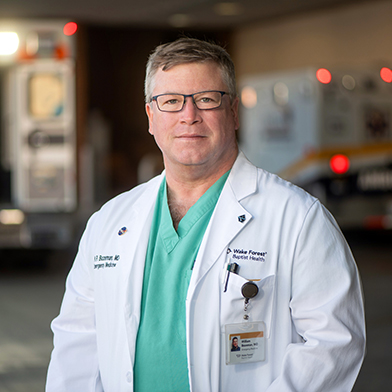 Many police departments have banned the use of neck restraints, citing safety concerns in the wake of incidents that have received widespread media coverage in recent years. However, new research from Wake Forest University School of Medicine shows that vascular neck restraint (VNR), when applied by trained law enforcement officers, is a successful and safe technique for officers to use when arresting aggressive or violent suspects.

The study appears in the November issue of the Journal of Forensic and Legal Medicine.

“It’s important to note that VNR is distinctly different from a chokehold,” said William P. Bozeman, M.D., professor of emergency medicine at Wake Forest University School of Medicine and emergency medicine physician at Atrium Health Wake Forest Baptist. “A chokehold is a form of neck compression that can restrict breathing, but VNR does not impair respiration.”

According to Bozeman, who is the principal investigator of the study, VNR is a technique that applies pressure to the blood vessels in the lateral neck. When applied properly, it may produce temporary unconsciousness or quick compliance from a person who is being combative. Pressure is not applied to a person’s airway or trachea.

For the study, Bozeman and his team conducted a large retrospective review of VNR use at three law enforcement agencies: North Carolina State Highway Patrol, San Diego Police Department and Royal Canadian Mounted Police. The agencies reviewed and submitted VNR uses, including training uses, for up to an 11-year period between 2010 and 2020.

There were 944 field applications of VNR against combative or resisting subjects reported by the three agencies, and no fatalities or significant injuries were reported. Researchers also found that the technique had a 92.6% success rate, meaning the VNR use allowed the combative person to be taken into custody.

Researchers also found that an estimated 85,918 law enforcement officers or trainees underwent hands-on VNR training with 14,083 of these receiving full neck pressure during training, and 71,835 receiving partial neck pressure. During these training exercises, there were no fatalities or significant injuries due to VNR.

Bozeman, who has led previous research that shows police use of force is rare, says that well-meaning policies that forbid the use of VNR should be revisited.

“By banning VNR, law enforcement officers have fewer options when taking a person into custody,” Bozeman said. “VNR is one of the least injurious tools that police have. And we now have evidence, for the first time, that it’s both safe and effective.”