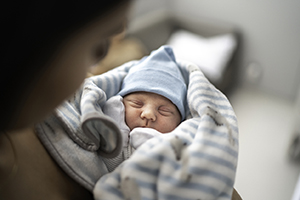 Newborns and young infants are particularly susceptible to the flu and are six times more likely to die from the infection than older children. Currently there is no flu vaccine available for babies less than 6 months old.

But thanks to a $2.9 million, four-year grant from the National Institute of Allergy and Infectious Diseases, scientists at Wake Forest School of Medicine are using a pre-clinical model to develop a safe and effective vaccine for infants less than 6 months old.

“Infants have a hard time making a good immune response to the virus, which is why they are so susceptible to severe infection from exposure to the flu,” said principal investigator of the study, Martha A. Alexander-Miller, Ph.D., director of the Center for Vaccines at the Extremes of Aging at Wake Forest School of Medicine, part of Wake Forest Baptist Health.

“This is coupled with the fact that infants are born with varying amounts of virus-specific antibody that they get from their mothers. That’s why it is now recommended that pregnant women get the flu vaccine because it is currently the only way to increase the level of protection in newborns until they begin to develop their own immune response and are old enough to get a flu vaccine.”

Over the past seven years, Alexander-Miller’s team has been conducting research in an animal model to try to unravel the mystery of why current influenza vaccines are so ineffective in young infants.

Their previous work focused on developing and identifying strategies that would drive a potent immune response in very young infants via an adjuvant molecule – “a little special sauce” that is added to the vaccine to better elicit an immune response, she said.

In the current study, another important area of investigation, she said, is to take what they have learned about stimulating an immune response in babies to develop a universal flu vaccine that would be effective over multiple seasons.

“Our ultimate goal is to identify a vaccine approach for influenza that is safe and broadly protective when delivered to newborns,” Alexander-Miller said.