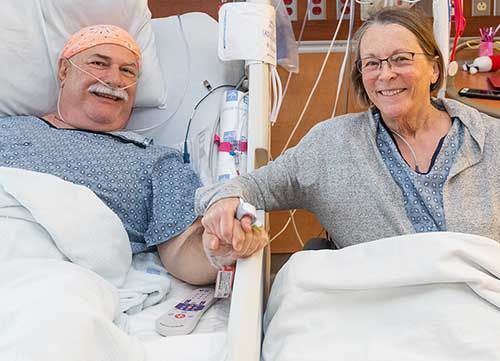 A few days ago Lynn Lawson gave her husband, Richard, the ultimate Valentine’s Day gift – one of her kidneys. Feb. 14 may be best known as Valentine’s Day, but it is also National Donor Day.

When Richard learned he would need a kidney transplant, his wife immediately began testing to see if she could safely be a donor and both were delighted when they learned she was. The couple will celebrate their 38th wedding anniversary next month.

“Organ donation is truly the gift of life – lives are improved and lives are saved. It’s also a profound experience for those who give,” said Carl Westcott, M.D., associate professor of general surgery at Wake Forest Baptist Health, and Lynn’s surgeon.

Last year, 243 patients received a kidney and/or pancreas at Wake Forest Baptist, which is the highest annual total in the history of the program.

Wake Forest Baptist is the largest kidney and pancreas transplant center in the state and among the 20 most active centers in the country.