In 2015, published findings from the landmark Systolic Blood Pressure Intervention Trial (SPRINT) showed that intensive blood pressure management reduced cardiovascular disease and lowered the risk of death. In 2019, results of the SPRINT MIND trial showed that lowering blood pressure also reduced the risk of mild cognitive impairment in older adults. Now, researchers from Wake Forest University School of Medicine have shown that while intensive blood pressure control was beneficial to SPRINT participants’ health during the trial, the benefits for cardiovascular mortality went away after approximately two years when protocols for blood pressure management were no longer being followed. 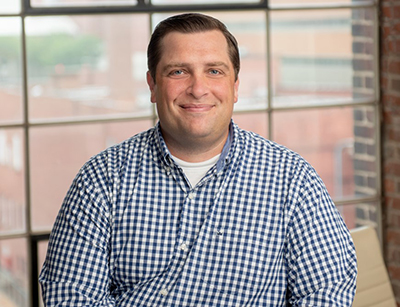 The study findings are published online in JAMA Cardiology.

“We wanted to examine the long-term effect of SPRINT’s intensive treatment,” said Nicholas Pajewski, Ph.D., (pictured at right) associate professor of biostatistics and data science at Wake Forest University School of Medicine and the study’s corresponding author. “The results are disappointing, but not surprising. If you have high blood pressure, controlling it is a lifelong commitment.”

The SPRINT trial, led by David Reboussin, Ph.D., professor of biostatistics and data science at Wake Forest University School of Medicine, confirmed that in adults 50 years and older with high blood pressure, targeting a systolic blood pressure of less than 120 millimeters of mercury (mm Hg) reduced rates of cardiovascular events, such as heart attack and heart failure, as well as stroke, by 25%. The target also reduced the risk of death by 27%—as compared to a target systolic pressure of 140 mm Hg.

The study began in the fall of 2009 and included more than 9,300 participants ages 50 and older, recruited from about 100 medical centers and clinical practices throughout the United States and Puerto Rico. Participants were randomly assigned to a systolic blood pressure goal of either less than 120 mm HG (intensive treatment) or less than 140 mm HG (standard treatment). The National Institutes of Health (NIH) stopped the blood pressure intervention earlier than originally planned to quickly disseminate the significant preliminary results, resulting in a new set of guidelines for controlling blood pressure.

In the latest study, Pajewski and team linked participants to the National Death Index from 2016 to 2020, which added 4.5 years of follow-up for mortality after the conclusion of the trial. They also examined the electronic health records of trial participants for outpatient measurements of blood pressure.