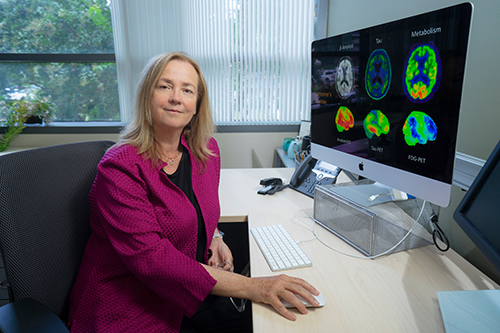 The Alzheimer’s Association, through its Part the Cloud global research grant program, has awarded Wake Forest University School of Medicine $795,000 over two years to study potential treatments for Alzheimer’s disease.

Part the Cloud is designed to accelerate translation of findings from the laboratory, through trials, into possible therapies — filling the gap in Alzheimer’s drug development by providing essential support for clinical studies.

“Nearly 6 million Americans are living with Alzheimer’s disease,” said Suzanne Craft, Ph.D., professor of gerontology and geriatric medicine at Wake Forest University School of Medicine. “With support from this grant, we hope to increase our knowledge in the development of much-needed innovative strategies for prevention and treatment.”

Craft, who is also the director of the School of Medicine’s Alzheimer's Disease Research Center, will lead a team in a Phase II trial to study empagliflozin, a drug used to lower blood sugar levels, and an intranasal insulin spray as potential treatments for mild cognitive impairment and Alzheimer’s disease. Insulin is a hormone that regulates the amount of sugar in the blood, but that also plays an important role in brain health.

“We know Type 2 diabetes has been linked to an increased risk of dementia,” Craft said. “Many patients with Alzheimer’s disease also have insulin resistance.”
Craft previously led a trial that showed that intranasal insulin can slow memory loss in people with Alzheimer’s disease. The nasal spray is designed to deliver insulin directly to the brain without negatively impacting glucose levels. This is the first known trial to study empagliflozin as a potential treatment for Alzheimer’s disease.

“Before and after the four-week treatment period, we will measure safety, memory, abnormal brain chemicals and brain blood flow,” Craft said. Results of the trial will be used to design a large Phase III trial.

Recruitment for the trial is expected to begin soon. More information is available by calling 336-716-6463.