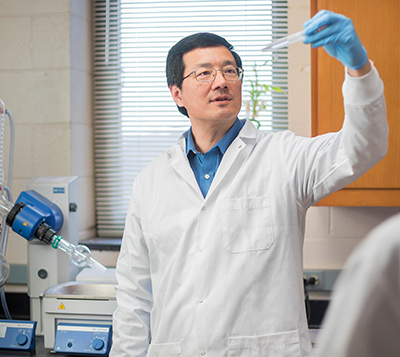 Researchers at Wake Forest School of Medicine have discovered that a nanoparticle therapeutic enhances cancer immunotherapy and is a possible new approach in treating malignant pleural effusion (MPE). MPE is the accumulation of fluid between the chest wall and lungs and is accompanied by malignant cells and/or tumors.

Results from the study are published in the current issue of Nature Nanotechnology.

There are more than 200,000 new cases of MPE in the United States each year, and non-small cell lung cancer accounts for more than one-third of cases.

“MPE is indicative of late-stage metastatic cancer and is associated with a poor prognosis with an average survival of only four to nine months,” said Dawen Zhao, M.D., Ph.D., associate professor of biomedical engineering at Wake Forest School of Medicine. “MPE can also severely impact quality of life as it causes breathlessness, pain, weight loss and reduced physical activity.”

According to Zhao, recent clinical trials involving immune checkpoint inhibitors (ICI) or novel immunotherapies such as anti-PD-1 have shown some encouraging data in patients with MPE. However, only a small number of MPE patients benefit from immunotherapy and many experience immunotoxicity.

“Clinical evidence also suggests that MPE comprises abundant tumor-associated immune cells that prevent the body’s immune system from recognizing and eliminating the cancer,” Zhao said. “This ‘cold’ immune environment could be a major contributor to the failure of ICI.”

To mitigate the immune ‘cold’ MPE, Zhao and his team developed a nanoparticle called liposomal cyclic dinucleotide (LNP-CDN) for targeted activation of an immune pathway called STING, which reprograms tumor-associated immune cells to active anti-tumor ones.

Upon intrapleural injection in a mouse model, the ‘cold’ immune environment lessened in not only the effusion space, but also within the tumors. Zhao’s team combined LNP-CDN with an anti-PD-L1 immunotherapy, which drastically reduced the volume of MPE and inhibited tumor growth in both the pleural cavity and lung tissue in mice with MPE, resulting in prolonged survival.

“Administered alone or with immunotherapy, this study demonstrates a possible treatment for MPE,” Zhao said. “Given the current prognosis of MPE patients, new interventions are needed to not only prolong survival, but also to improve quality of life.”

The Wake Forest School of Medicine researchers have filed a patent application for the nanoparticle-immunotherapy system.