River Wilson was born at The Birth Center at Wake Forest Baptist Medical Center on Nov. 15, 2020 at 25 weeks. His due date was March 1, 2021. He weighed 1 pound, 11 ounces and was 11 inches long – a few centimeters shorter than an average-sized Barbie doll. Micro-preemies, like River, are babies born before 26 weeks gestation or weighing less than 1 pound, 12 ounces.

River was born to Jessica and Hayden Wilson, of Greensboro, and has two older sisters, Ridgely, 8, and Murphy, 2.

River in the palm of his mom’s hand soon after birth. 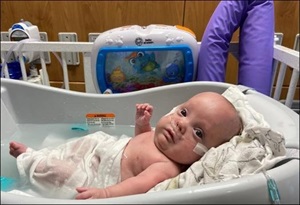 River enjoying his first official bath a few days ago.

Almost 6-month-old River was discharged Monday, May 3, after 169 days in the Dale and Karen Sisel NICU at Wake Forest Baptist, and now weighs 9 pounds, 4 ounces. 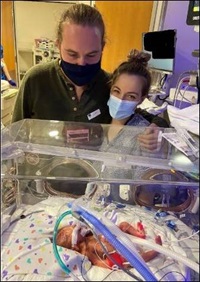 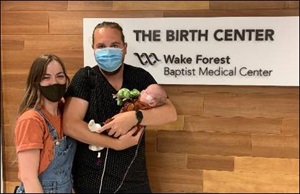 River and his parents leave The Birth Center at Wake Forest Baptist after an almost six month stay.

Jessica started going into labor with River when she was 19 weeks pregnant, due to preterm premature rupture of membranes (PPROM). She was admitted to The Birth Center where clinicians were able to delay her delivery for six more weeks. PPROM is a rare condition, where the sac (amniotic membrane) surrounding the baby breaks before week 37 of a pregnancy and increases the chance of delivering the baby early.

“For 169 days, I stared out the NICU window and wondered when this day would actually happen,” Jessica said. “This day has always felt so far away, but it’s here now and it’s the ultimate Mother’s Day gift. I remember when he was still in his incubator I would tell him we’d see his discharge day, no matter what. The bonds that I have made with the staff here are just unbreakable. They took care of and saved my son and now because of them, his next chapter is starting.” 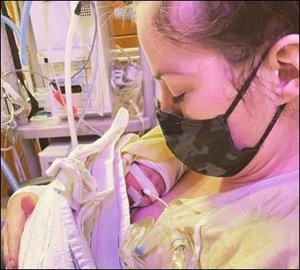 Jessica's first time holding River. She had to wait 32 days until she was able to hold her son, due to his fragility. 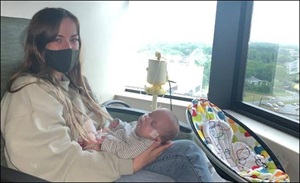 Jessica's last time holding River in the NICU before he was discharged to go home.

“Babies, like River, born at 25 weeks – almost 4 months early – can have a lot of complications,” said Corbin Downey, M.D., assistant professor of pediatrics - neonatology at Wake Forest Baptist. “This is because their organ systems, from their brain to their lungs, are not yet fully developed. These babies stay with us in the NICU for several months and it’s very rewarding to watch them grow and conquer so many obstacles and then get strong enough to go home.” 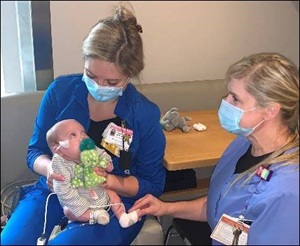 River looks up at one of his nurses, Hannah Privette, as he prepares to go home.

As the region’s only Level IV NICU, the Dale and Karen Sisel NICU has experts who provide specialized care for babies born as young as 22 weeks gestational age, giving the tiniest and most vulnerable patients the best chance of not only surviving, but thriving throughout their lives. 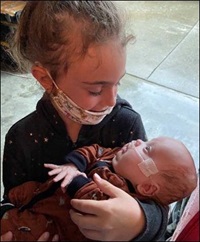 River meeting one of his big sisters, Ridgley. 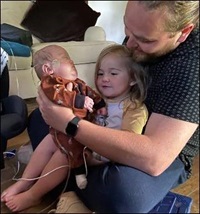 Due to COVID-19 visitor restrictions, River’s two sisters were not able to meet him until he arrived home yesterday.