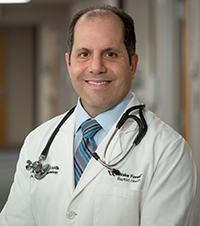 For most people, getting a full night of deep, restful sleep can be difficult every once in a while.

For many others, it’s downright impossible every night.

That’s because of obstructive sleep apnea, the temporary but repeated stoppage of breathing during sleep. Its symptoms typically include heavy snoring and gasping for air during the night and daytime drowsiness, fatigue and difficulties with concentration and memory. Left untreated, the condition can lead to some critical health issues.

Unfortunately, the majority of people who have sleep apnea don’t know it.

A study by the American Academy of Sleep Medicine found that while approximately 30 million American adults have obstructive sleep apnea only about 6 million, or 20%, have been properly diagnosed and treated.

“The reason sleep apnea goes unrecognized so often is simply that it happens when people are asleep,” said Wake Forest Baptist Health pulmonologist and sleep medicine specialist Andrew Namen, M.D. (pictured at right) “In many, many cases the individual isn’t conscious of what’s happening in their sleep. It’s frequently a bed partner or other member of a household whose sleep is disrupted by the other person’s snoring or gasping that brings it to their attention.”

Obstructive sleep apnea occurs when the muscles relax during sleep, causing soft tissue in the back of the throat to collapse and block the upper airway, which leads to pauses in breathing. Despite the sleeper’s efforts to breathe, the lungs in many cases are deprived of sufficient oxygen. When this happens, the body senses it and wakes up, resumes normal breathing, then falls back asleep until the next airflow interruption – which may be only minutes later.

The severity of sleep apnea is gauged by how often breathing stoppages lasting at least 10 seconds occur during an hour of sleep, with five to 15 considered mild, 16 to 30 moderate and greater than 30 severe. Thus, a person on the low end of the scale can have dozens of occurrences a night while someone with a severe case can have well over 200 – often without their realizing it.

“A lot of my patients tell me they feel OK when they sleep but that they’re always so tired during the day, despite an adequate amount of sleep,” Namen said. “That’s because most people experience apnea during the period when we normally get the deep, rapid eye movement sleep that is restorative. The apnea prevents staying in that deep, refreshing sleep we need.”

Over time, these repeated disruptions of sleep and oxygen supply can produce effects far worse than next-day fatigue. Sleep apnea is a known cause of high blood pressure, is associated with heart failure, atrial fibrillation, stroke and other diseases and can worsen respiratory disorders such as asthma.

“If they’re happening hour by hour, night by night, month by month, year by year, a patient’s body will change as a result of these ongoing ‘insults’ that occur during sleep,” Namen said.

While the “typical” sleep apnea patient is an overweight middle-age man, anyone can develop the condition at any time.

Gender is a factor – sleep apnea is more common and more frequently severe in men than women – and so is age – risk increases after 40 with a peak of occurrence around 55. Ethnicity also counts: In this country sleep apnea is seen more often in people of African, Native American and Hispanic descent than in those of other backgrounds. Obesity is a major cause of the condition in adults, especially those with body-mass index scores of 32 or higher. Inherited anatomical features – jaw shape, tonsil size, neck circumferences – can have an impact on the incidence of sleep apnea, as can lifestyle habits such as smoking, drinking alcohol and taking certain medications, especially sedatives.

“Something you take to ‘help’ you sleep may in fact make your sleep breathing more challenging,” Namen said.

The recommended first step for anyone who suspects they may have sleep apnea is to consult a primary care doctor, who can assess the problem and determine whether a referral to a sleep medicine specialist is warranted.

A sleep specialist is a physician with a background in pulmonology, neurology, otolaryngology or another discipline who is equipped to deal with sleeping problems because of their specific training, familiarity with the various disorders and experience with diagnostic techniques, including sleep studies.

A conventional sleep study is an overnight session in a sleep lab during which a person’s brain activity, heart rate and rhythm, blood pressure, breathing, oxygen levels and other markers are recorded. Despite being hooked up to an array of monitoring devices, “about 80 percent of sleep study patients are able to sleep in the sleep lab so we can make a solid diagnosis,” Namen said.

There are also at-home sleep tests, which track breathing and oxygen levels during one night. While more convenient than sleep lab studies, they provide less data and may require a follow-up conventional study.

Treatments for obstructive sleep apnea vary, depending on the cause and severity of the condition. Lifestyle changes – losing weight, avoiding alcohol, quitting smoking – are often the initial steps. Some patients benefit from special pillows or other means to keep them from sleeping on their backs, while other people are helped by oral appliances that keep the airway open during sleep. Cases caused by physical blockages of the airway may call for surgical procedures, such as removing the tonsils. A recent development in sleep apnea therapy is a surgically implanted device that monitors breathing during sleep and stimulates a nerve that opens the airway.

But the standard-of-care treatment for obstructive sleep apnea is a continuous positive airway pressure device, better known as a CPAP machine. It pumps air through a tube and a mask over the nose and mouth to keep the airway open during sleep. Many people have difficulty getting accustomed to sleeping with the mask on, but a CPAP unit can be very effective if properly maintained and used all night, every night.

“There is no one-size-fits-all treatment for sleep apnea,” Namen said, “but we do know that if you treat a patient with CPAP you can resolve the condition in most patients.”

Jim Becher wouldn’t disagree with that.

“I had trouble breathing at night, for three or four months, about a year ago,” said the Becher, 81, the chairman of a Greensboro-based holding company who has residences in Winston-Salem and rural Alleghany County. “I asked people I know from my position on the board of Alleghany Health in Sparta, which is affiliated with Wake Forest Baptist, if they could recommend anyone and they said to see Dr. Namen.”

At Namen’s direction Becher took an at-home sleep study, which indicated he had a mild case of sleep apnea.

“I don’t have a horrible case of it, but I qualified for a CPAP machine,” he said. “In fact I have three of them – one at the farm, one at the house and one I travel with.

“It took me two, maybe three weeks to get used to the mask, but after that, no problems at all.”