Concussion is More Than Just a Headache, So It's Good to Know the Symptoms

You don’t have to be a football player to get a concussion. 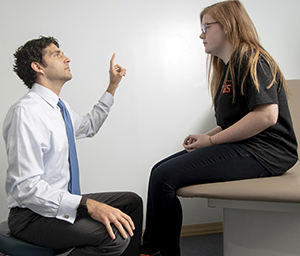 “Concussions are a disruption in normal brain function that’s usually brought on by trauma,” said Wake Forest Baptist Health physical medicine and rehabilitation specialist David M. Popoli, M.D. “That can be a collision during athletics, a fall to the ground during athletics or even something as simple as smacking your head on the back of the medicine cabinet.”

And you don’t necessarily have to be hit in the head.

“You can be hit in the chest and the force can be transmitted up to the head and that can still result in the same injury,” Popoli said.

A concussion happens when the brain, which is made of soft tissue and surrounded by a cushioning fluid, is jolted hard enough to make it move around inside the skull, sometimes to even make contact with the inner side of the skull.

Concussions are the most common and mildest type of traumatic brain injury, but that doesn’t mean they can ever be taken lightly. According to the American Association of Neurological Surgeons, “although some concussions are less serious than others, there is no such thing as a ‘minor concussion.’”

That’s because any concussion, however slight, temporarily disturbs brain activities that control so many of the body’s systems and can produce a range of physical, mental and emotional symptoms that vary in number and severity from case to case.

“Even though people can have the same injury their symptoms can be very different,” Popoli noted.

Recognizing the symptoms is important because a concussion can’t be seen with an X-ray, MRI, CT scan or any other imaging method. Doctors and other health care professionals – nurses, physician assistants, emergency medical technicians, certified athletic trainers – are trained to do so, but “civilians” should also be with familiar with the signs of concussion and how to respond to them.

This is especially true for the parents of young children and those caring for older adults. Because infants, toddlers and senior citizens are prone to falls and other accidents and may be unable or unwilling to describe how they feel or what may have happened, they are included among those at higher risk for concussion, right alongside athletes who play football, ice hockey and other frequent-contact sports and people who engage in recreational activities such as bicycling, motorcycling, skiing and skateboarding.

The most common symptoms of concussion are also the most likely to appear immediately. These may include temporary loss of consciousness, headache, confusion, dizziness, nausea, vomiting, slurred speech, delayed response to questions, appearing dazed and not remembering the event that caused the possible concussion.

In some instances, these symptoms can go away in as little as 15 minutes. But that doesn’t mean that a concussion has run its course. Other effects may not occur until hours or even days after the trauma, among them fatigue; problems with thinking, concentration and memory; sensitivity to light and noise; difficulties with sleep; and emotional issues such as mood swings, irritability, anxiety and depression,

The presence of any of these symptoms should prompt a visit to a physician or other health care provider, and definitely should if any symptoms linger or become worse.  “If you think you or someone you know has a concussion, contact your health care professional,” is the recommendation of the Centers for Disease Control and Prevention.

“The key thing is making the diagnosis early,” Popoli said. “The longer something goes undiagnosed the trickier it becomes to manage the different elements of concussion.”

To make a diagnosis a practitioner usually will evaluate the nature of the injury and the symptoms based on the patient’s responses to questions; perform a neurological examination to check vision, hearing, balance, reflexes and coordination; and conduct some cognition tests to assess memory, concentration and the ability to recall information. Imaging is generally not done unless the symptoms are severe or a skull fracture or similar injury is suspected.

As for how concussion is treated, that varies from case to case just as the degree of severity and range of symptoms do.

“A lot of treatment is tailoring it to what people are experiencing,” Popoli said. “There’s really not a one-size-fits-all solution.”

But all concussion treatment regimens share one element: rest, which allows the brain to heal. This generally includes avoiding physical exertion, especially manual labor and sports, and mental activities such as reading, watching TV and using a computer until the symptoms subside, followed by a gradual return to normal activities. Going back to school or work or the playing field prematurely is inviting trouble.

So how long does usually take to recover from a concussion?

“There’s no time frame during which you should expect a complete recovery,” Popoli said. “The vast, vast majority of patients will resolve their symptoms within a month. At the bare minimum, you’re looking at five days.”

And if you’ve had a concussion, be extra careful out there: The No. 1 risk factor for concussion is a previous concussion.