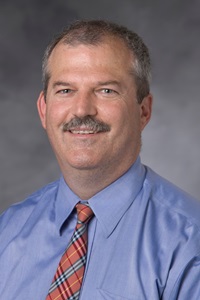 Wake Forest Baptist Medical Center today announced Robert Phillips Heine, M.D., a renowned Duke University physician-scientist whose major focus has been reproductive infectious diseases and their impact on pregnancy outcomes, has accepted appointment as Chair of the Department of Obstetrics and Gynecology (OB-GYN), effective February 1, 2019. Heine is board certified in obstetrics and gynecology and maternal-fetal medicine.

Heine currently holds several positions at Duke University Health Systems as professor of obstetrics and gynecology and pediatrics, vice-chair for obstetrics, and medical director of the women’s clinical services unit.

In 2000, Heine became the division director of maternal-fetal medicine at Duke University. He has held other appointments while at Duke, including OB-GYN interim chair, vice-chair for administration, and medical director for the Durham County Health Department’s obstetrics and family planning clinic.

Heine also holds two patents related to the ability of neutrophil products   ̶   neutrophil is a type of white blood cell  ̶  to screen for varying infectious processes including labor-related infections as well as sepsis and meningitis.

His current clinical and research interests focus on the role of infection and inflammation in adverse pregnancy outcomes and in the use of immunizations in pregnancy for the prevention of disease in the mother and the newborn. He is a national expert on Zika virus exposure and infection and served as an advisor to the American College of Obstetrics and Gynecology in this capacity.

Heine, who goes by Phillip, is married to Holly Jean Coward, M.D., a geriatrician who is a Wake Forest School of Medicine alumna. They have two sons, James and William. Coward is also accepting an appointment in Wake Forest Baptist’s gerontology and geriatric medicine department.