Where There's a Grill There's a Way: Cookouts Can Be Part of Healthy Eating

You love backyard cookouts, but also want to maintain a healthy diet.

No problem. Go ahead and fire up that grill! 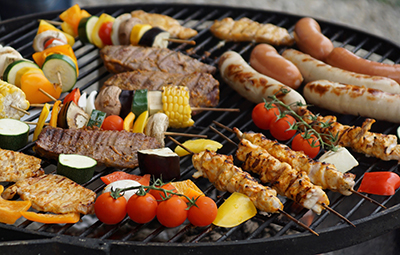 Just be smart about what you cook and how you cook it, and be willing to broaden your view of what‘s grillable.

“When we think backyard barbecue it’s usually steaks, hamburgers, hot dogs, maybe with a bag of chips on the side,” said Annette Frain, M.S., a registered dietitian with Wake Forest Baptist Health. “But it can be much more than that. There are so many other things that taste great grilled, including vegetables.

“What you have to do is make sure the meal is balanced even though it’s a backyard barbecue.”

That’s because grilling, unlike other methods, cooks food three ways at once, explained Dr. Joey Skelton, a pediatrician at Wake Forest Baptist’s Brenner Children’s Hospital and an unabashed foodie.

“Grilling cooks by convection, which is heating the air all around what’s being cooked, as in an oven, and also by conduction, which is direct contact with a hot surface, in this case the metal grill but the same as a skillet on a stove top,” said Skelton, who conducts programs in culinary medicine, a new field that employs nutrition and good cooking habits to restore and maintain health. “Both of these will produce some browning on what you’re cooking, maybe some char, and some flavor.

“What grilling adds that your oven or stove top doesn’t is radiant heat. You won’t get that in an oven unless you’re using the broiler, but you will always get it on a grill because whether you have charcoal or gas lit you’re going to have rays of heat coming up to add another, different layer of browning, charring and flavor to whatever you’re cooking.”

There’s also a smoke factor to the flavor of grilled foods, he said, whether from some fat dripping from meat onto the coals or the use of woods chips.

But isn’t that dripping, smoking and charring unhealthy?

Yes, to a degree. Grilling meat over high heat produces two chemical compounds – heterocyclic amines (HCAs) and polycyclic aromatic hydrocarbons (PAHs) – that have been linked to cancer in animal studies, and inhaling smoke is never good. But the risk level of getting cancer from weekend cookouts is quite low.

“If you’re eating well-done steak off a grill five times a week you might have a problem, but for the average person who’s grilling once a week or so it’s not a major concern,” Skelton said.

There’s also little difference health-wise between propane and charcoal for the occasional backyard chef, he said.

“Using a gas grill is probably a little cleaner and healthier than grilling over wood or charcoal, and it’s a little more convenient, but we don’t really know for sure,” Skelton said. “Again, if you’re grilling once or twice a week it probably doesn’t matter much either way.”

What does matter when grilling with lump charcoal or charcoal briquettes is how you start the fire.

“Never use lighter fluid or ‘quick-start’ briquettes that are pre-soaked with it,” Skelton said.

“There are all kinds of bad things in there that you’ll be releasing and they’re going to give off unwanted flavors to whatever you’re cooking. Also, regularly using lighter fluid or quick-start briquettes can leave off-flavors deposited in your grill, which can make other foods you cook there taste weird.

“Instead, get a chimney starter, which is a really simple and effective way to light charcoal.”

Also important is cleaning the grill before cooking, which is best done with a wire brush when the grill is hot. After that, the grill grates should be lubricated with a high-heat cooking oil, such as canola or vegetable, to keep the food from sticking

But definitely wait until the flames die down before you put your food on the clean and oiled grill.

“You want to grill over hot coals, not open flame,” Skelton said. “Flames are going to char the meat, not in a good way, and you can easily end up with meat that’s burnt on the outside and raw on the inside.”

Skelton also recommends using a spatula or tongs to turn meat or fish on the grill; soaking wood chips in water to reduce the risk of flame-ups; and relying on a meat thermometer and a timer to better gauge when your food is properly done.

So what’s good to grill?

“We want to have protein on our plate, but it shouldn’t be disproportionate,” said Frain, a program coordinator in Wake Forest Baptist’s Weight Management Center. “You don’t need a two-pound cowboy steak. Lean cuts of beef are great, but you can also choose chicken, pork tenderloin, lamb or fish, including shrimp and salmon.  And you definitely shouldn’t forget the vegetables.”.”

The lineup of vegetables suitable for grilling isn’t short.

“People probably first think of the green bell pepper and onion that you put on kebabs, but there are so many others,” Frain said, citing eggplant, zucchini, corn, tomatoes, asparagus, mushrooms, carrots, green beans, broccoli and cauliflower. “They all have a different taste when they’re grilled.”

For the best results, she suggests using a grill pan to prevent vegetables from falling through the grates.

Grilling aside, there are plenty of side-dish options available with seasonally fresh produce.

“Salads are great at cookouts, but remember that salads don’t have to be lettuce-based,” Frain said. “And they shouldn’t be drenched in a lot dressing. A light, homemade vinaigrette with fresh herbs is easy and healthy.”

Serving grilled fruit such as peaches or pineapple for dessert or offering fruit- or mint-infused water as a refreshing alternative to alcoholic and sugary drinks also can add to a cookout’s healthy quotient.

“You should really be willing to try some different things,” Frain said. “You never know, an experiment could become a tradition.”

What you definitely do not want to do, she said, is leave cooked meat or side dishes like potato salad outside in hot weather for a long period of time.

“If you do you’ll be having a cookout that your guests won’t ever forget,” Frain said, “because they all walked away with food poisoning.”